Pictured are jars from the Premium Glass Co., and the Mason Fruit Jar factory. The Premium Company was one of the very few to put the name of a town on the jar. The Mason Fruit Jar and Bottle Company plant operated for two years, 1907-1909 before being purchased by the Ball Brothers Fruit Jar Company. 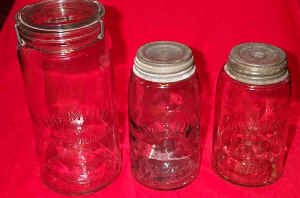